When the 101st Mechanized Cavalry Division took over a small town in southern Germany in 1945, Leo Rost said they believed the enemy fire had stopped.

“When we took this town over, it had been neutralized for a few hours,” Rost said.

But around 11 a.m. that April morning, they realized that wasn’t the case.

Rost pulled up his jeep beside another jeep with his buddies in it. He was standing outside the jeep talking to them, when the Germans showed they weren’t finished.

“All of a sudden the mortar shells started coming into town,” Rost said. “Everything was supposed to be quiet and secured, but it wasn’t.”

A mortar shell hit within 5 feet of Rost and tore into his arm and leg.

“I remember when I got hit I started hollering at the guys in the jeep and said ‘Where’s my arm?’ – I couldn’t feel nothing. And he said – ‘Well, it’s behind you,” Rost recalled.

Rost’s right arm, he said, was dangling behind him. He had five inches of crushed bone in his arm and the shrapnel sliced his radial nerve from his shoulder down to his fingers.

“The medics hauled me 90 miles to the field hospital in the back of a jeep on a stretcher,” he said. “They had to stop at least two times at some first aid stations to give me blood plasma because I was losing so much blood. I had a hole in my left leg – that was broken and my arm was shot clear in two. The radial nerve was shot off and I had no feeling of any kind.”

In the field hospital, a doctor operated on his arm and put his radial nerve back together.

“I was really lucky to have the help I had because I would have never made it on my own. I couldn’t have,” he said.

From the field hospital, Rost was taken to a larger hospital in Paris, France. It was there that a Red Cross nurse sent a note to Rost’s wife Mabel, who didn’t know anything about his injuries at the time.

The note from the nurse in France was a relief for her, especially when she read in the Des Moines newspaper that he was missing in action, and worse yet – that he was coming home a basket case. 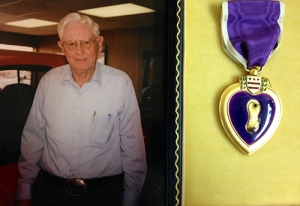 Twelve days after the mortar shell explosion, World War II was declared over in Europe. Rost spent a month and a half hospitalized in England and Scotland.

“We ended up in Glasgow, Scotland. From there, they put us on a C-54, still on stretchers, and we landed in New York. Then they put us right on a C-47 and took us to Memphis, Tenn., to the nerve hospital,” he said.

Rost spent the better part of a year at the nerve hospital. It was an entire year before he could even move his wrist, he said, and another several months before his fingers started moving. When he was finally ready to get out of the hospital to go home, it was July 3, 1945.

Prior to being drafted in 1943, Rost farmed with his father near Palmer. He spent six months in basic training at Camp Polk in Louisiana with the 8th Army Division maintenance mechanics.

Rost was granted six months leave of absence to help his father, who had heart problems, on the family farm.

When he was reactivated, he was sent to Fort Knox, Ky., again in the 8th Army Division.

In the fall of 1944, he got on a train and went to California. He said they thought they were going to the Pacific. However, about 30 members of his division were sent back and eventually ended up at Fort Meade.

Mabel Rost traveled by train to Fort Meade in Maryland where the two got married in January 1945, a few days before he shipped out of the New York Port of Embarkation to Paris, France. They are still married, 65 years later.

It took 13 days to get across the ocean in a ship with 33,000 people onboard, he said. At one point they were concerned about submarines, but he said they got away from them and landed safely on the coast of England. From England, they took another ship across the English Channel to France. And then from France, he boarded a train to Germany.

In March 1946, Rost was discharged at age 27. He had received the Purple Heart and held the rank of Technician 5 when he left the Army.

When Rost returned home from his time overseas and in the hospital, he was still in a cast. He worked – left-handed – at a car repair station in Manson with his arm in a sling. He even trained mechanics on site under the GI bill. 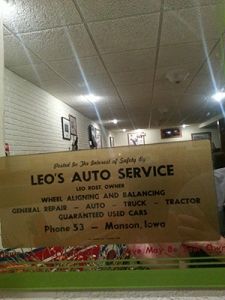 Rost retired from the business in 1988. His two sons, daughter and son-in-law run Rost Motor Inc. in Manson.

Even at 91, Rost isn’t completely out of the business.

“I still go up there about every day,” he said. “It gets in your blood.” 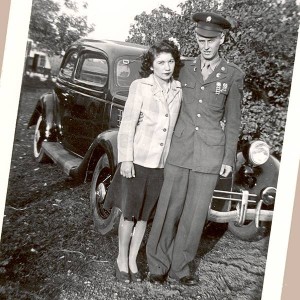 Share on FacebookShare on TwitterShare on Linked InShare by Email